Matter-energy, space-time and diversity are resources we have inherited. / The privilege of using them includes the operational responsibility to bequeath them unsullied to our successors. / The way we dispose of them will generate a future, the inhabitants of which will praise is or condemn us. / Be assured, the future is not a time zone to which we are heedlessly going, it is a condition we are consciously creating. / The roads to the future are not unveiled, they are manufactured, and the process changes both the makers and the destination. Dr Jack Greenland, back cover of Foundations of Architectural Science, 3rd edition, 1998.

John Joseph Greenland, (always known as Jack), was born in 1926, graduated with a BSc (App) from the University of Queensland in 1947, worked as a research officer on ‘passive design’ at the CSIRO Division of Building Science from 1949 to 1954 and then briefly in a business venture in sheet metal and roofing. He then taught at TAFE and went back to research and completed MBldgSc (1969) at the University of Sydney (USyd).

Which is where I, as an undergraduate student, first met Jack as a teacher in the Department of Architectural Science (DAS), researching his PhD (awarded 1973). The department, founded years earlier by Professor Henry (Jack) Cowan, was long on scientists, but short on architects and even shorter on good teachers, which made both Jack Greenland, and the recently mourned Steve King, stand out.

Cowan, considered by some as the godfather of architectural science, summed up the oxymoronic difficulty of combining science and art in architecture in the title of his memoir, A Contradiction in Terms. Nevertheless, a golden era of architectural science began: Alan and Sue Coldicutt in Melbourne, John Ballinger at UNSW, Steve Szokolay in Queensland, and Deborah White in Adelaide.

This was the core group of researchers and teachers who made the difficult but critical issue of physics in architecture readily accessible to students from the late seventies on, stressing its relevance to the practice of a truly, and we now appreciate sustainable, modern architecture.

Greenland was a gifted polymath: trained in science and architecture; he held a pilot’s license, was a superb musician (scoring and playing the clarinet and saxophone in the USyd architecture revues), and was an excellent communicator. But it was his ability to analyse and reduce complex scientific issues to easily understood ideas and demonstrate their relationship to architectural design that was his core teaching skill.

Greenland understood that the key to good teaching was to be aware of the audience and their capacity for learning. He knew that much of architectural science has too much science and too little architecture, at least for students of architecture. His measured vocabulary in his lectures and presentations made science issues comprehensible for designers. Unlike most university lecturers who concentrate on what they want to tell students, he knew how students could learn.

Good teaching was not rewarded at university then; even less so now. Traditionally there are three requirements in academia: research, administration, and teaching. Within the hierarchy of a university, researchers ‘profess’ in refereed academic journals to become professors; administrators organise coursework to become Deans, and teaching is mostly left to lecturers and tutors. Although most students see a university’s core activity as teaching them, it is left to lower ranked, often untenured, staff who are never rewarded for their abilities with a significant career path.

The DAS at USyd was long on research, and teaching was often secondary, so when the NSWIT, soon to be the University of Technology, Sydney (UTS) offered Jack Greenland a position in the mid 70s to establish an architectural science unit, with significant teaching responsibilities, he jumped at the opportunity, and remained there as senior lecturer until 1986, and for another seventeen years as a visiting lecturer at UTS and UNSW.

The UTS architecture school had several advantages: firstly, it differed from all others as it was based on a part-time course: after a full-time first year, students worked four days in an accredited practice, and studied for one day and one or two nights at university. Students learnt quickly, but were continually tired, and it took all of Greenland’s considerable expertise to hold students’ attention in those late-night classes.

Secondly, it was not one of the ‘sandstone universities’ with their emphasis on research excellence; and thirdly it had an acerbic and irreverent head of school in Neville Quarry, who had appeared as a judge in the original Inventors on the ABC, invited leading overseas architects to speak, and was fond of the sharp quip such as Michael Graves being the “first past the post-modernist”. He wasn’t averse to promoting popular publications rather than the academic.

Greenland took advantage of this in 1985 to write, together with Steve Szokolay, a seminal work on Passive Solar Design in Australia for the RAIA – back in the days when the Institute, through Judy Vulker, published useful texts for working architects. The book surveyed the emerging discipline of passive solar, with an explanation of its importance and value that was to become a central tenet of sustainability. 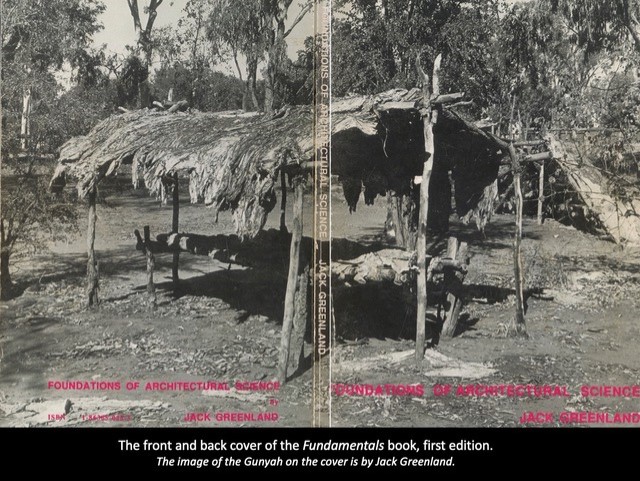 Jack’s lectures were richly illustrated, but there was no concise text that students could refer to, despite encouragement from Neville Quarry. All this was to change in 1989 when Winston Barnett, himself a gifted teacher and writer, arrived from England to take up the new professorship. Greenland was encouraged by Barnett to set his lectures into a book, which was published in 1991 as Foundations of Architectural Science: Heat, Light and Sound. 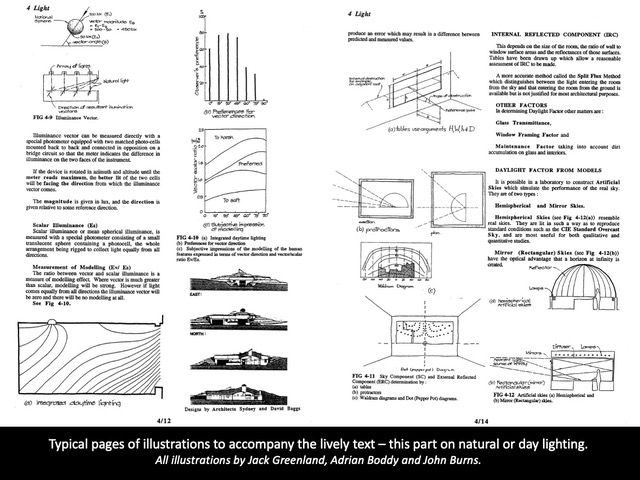 Unlike books before and after, the Foundation book, with its generous use of allegories, diagrams and photos to explain principles, was easily understood by architecture students who lacked a strong physics or mathematics background. It shunned the dominance of formula and algorithm in favor drawings and cartoons, by Jack’s hand as well as numerous contributions from John Burns and Adrian Boddy. 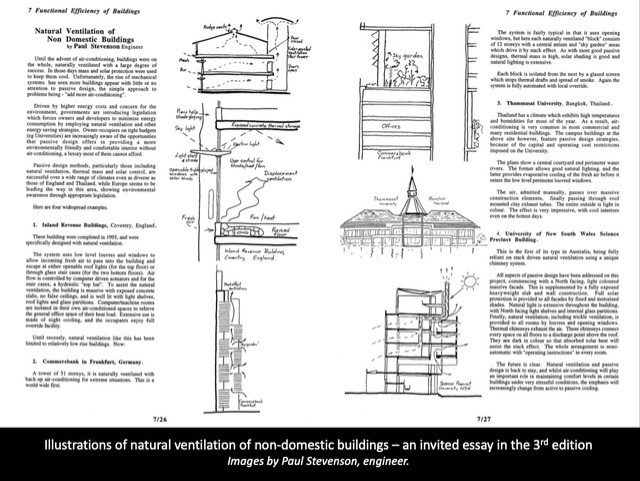 This was the secret to the success of the book: it was like being at one of Jack’s entertaining lectures, with plenty of visuals to accompany the rich text. The book is dedicated to Jack Cowan, and had three editions, the second in 1993, a third in 1998, with a reprint in 2003. Jack was a noted sinologist and used his travels and teaching in various universities in China to rework the book in Chinese for Northern hemisphere readers. 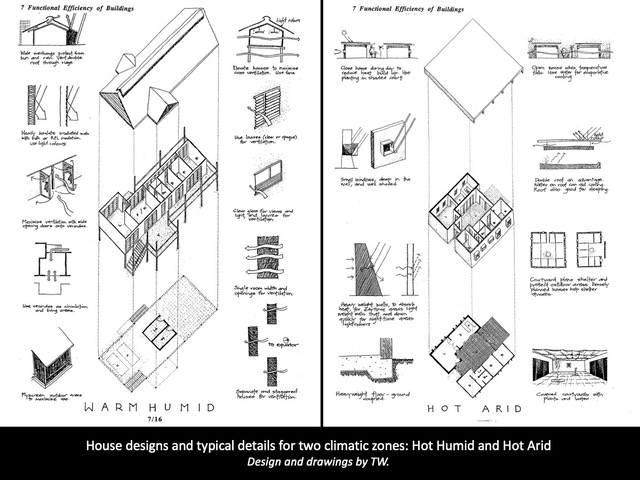 I was delighted to be asked by Jack to create some diagrams for the book, on design ideas in houses for four different climates (hot humid, hot arid, temperate, and cold) to illustrate the physical principles in the book. These were line drawings with details and notes in the margins. 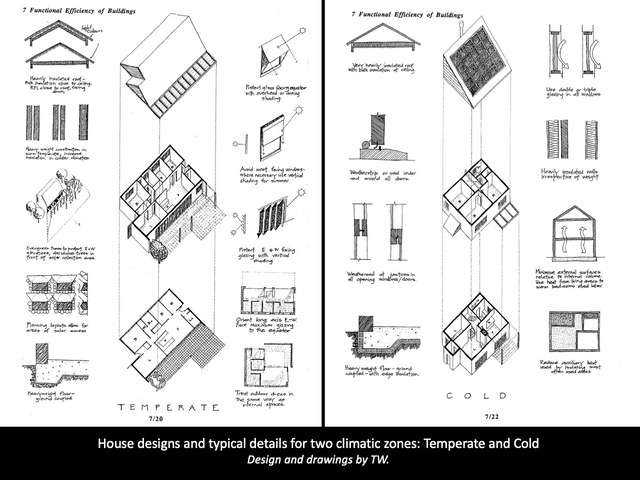 In the book’s acknowledgements Jack was kind enough to say, “Tone and I have had a long association in this field, and I believe we think alike in these matters”. I only think that way because I was summarising everything I had learnt in architectural science from Jack Greenland and Steve King. 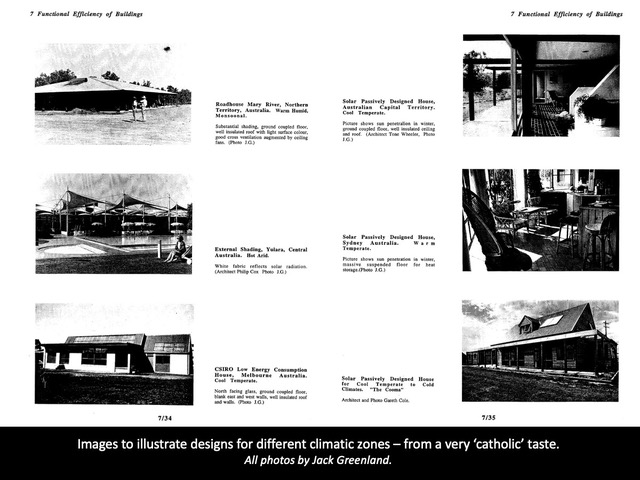 Two remarkable things about the book: the front cover depicts an indigenous shelter, as an illustration of shade and ingenuity of materials, long before we understood the brilliance of these simple forms from Paul Memmott’s Gunyah Goondie and Wurley, the Aboriginal Architecture of Australia, about to be republished next month. Hooray.)  And secondly, the proceeds from the book enabled him to establish both the Jack Greenland Environmental Studies Prize and the Jack Greenland Travelling Scholarship. 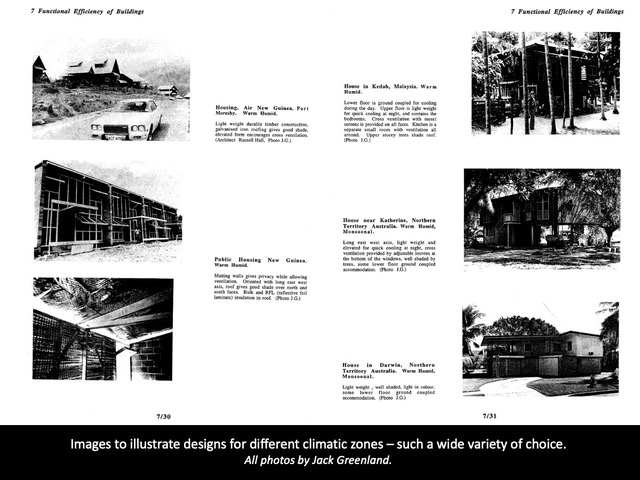 Sadly, along with the passing of Jack Greenland we must also record the passing of the Fundamentals book; it is no longer available. It’s been replaced by a text by his former collaborator, Steve Szokolay. Unfortunately, it is a return to the approach of algorithms and worked mathematical examples, instead of Jack’s love of diagrams and drawings.

As an introduction to architectural science, it goes much further than any student needs, and I believe is counterproductive. I say this believing that there is a salutary lesson in understanding the difference of approach between an academic and a teacher. Steve Szokolay’s text, despite his excellent command of science, is dry and difficult to appreciate its causal impact on architectural design. Jack Greenland on the other hand, spent a lifetime trying to explicate difficult scientific ideas so that students could understand and use them. 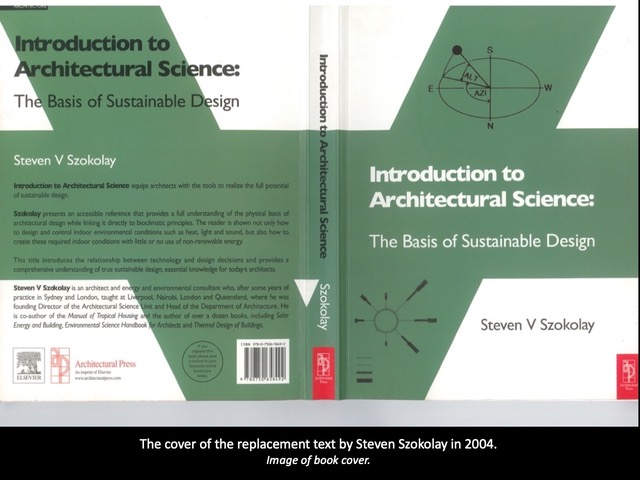 This is what is embodied in the Fundamentals of Architectural Science, heat, light, and sound. If you’ve got a copy, hold on to it. If you haven’t, buy one (if you can find it) or demand (as I am doing) that UTS reprint it. Now that Jack Greenland, and his great gift for teaching, is gone, it is all we have left of the great era when science was a core study for architecture.

My final compliment to dear Jack is this: when, at the urging of Winston Barnett, Glenn Murcutt became the visiting professor in 1991, I was asked to help tutor his first group of students, a particularly gifted third year, for whom Jack Greenland was a favorite lecturer, no mean feat given he had the most difficult of subjects to teach.